July was an excellent example of the tremendous value offered by a subscription to Webcomics.com. My readers got early alerts on issues that would impact their businesses, helpful tutorials, insightful analysis, and meaningful feedback on their work. Here are some samples of what you may have missed…

Patreon’s header image gets sliced and diced more than Wolverine’s keyboard. It gets re-sized depending on the monitor-resolution of the person visiting your Patreon page, and it gets cropped ruthlessly when you post a link to your page from Facebook or Twitter.

When Patreon updated its site layout, it introduced some dead zones into the header. And, to be honest, Twitter has been showing the header preview more similar to Facebook’s presentation. So, an update has been long overdue.

So here’s an updated Photoshop template to help you make the most of your header. [Subscribers can read the entire post]

When is a complaint actually a compliment?

It sounds like a weird webcomics riddle, doesn’t it? “When is a complaint actually a compliment?” After all, as webcartoonists, we’ve always prided ourselves one the granular level of interaction that we maintain with our readers. Both the original “How To Make Webcomics” book and the updated version, “The Webcomics Handbook” devoted an entire chapter to it. One could argue that it’s a definitive feature of webcomics.

So, it stands to reason that when readers complain, we webcartoonists become very concerned.

Except when we shouldn’t.

Here’s what you need to understand…

I see this advice getting passed around on Facebook quite frequently: “If you include a link to your website, the Facebook algorithm will kill your post.” Let’s talk about how accurate this advice  is — and some Best Practices for promoting on Facebook.

First of all, let’s try to understand the issue a little more clearly.

How to do a reader survey

Reader surveys are an excellent way to get a better feel for your audience. Does your comic skew towards female reader? Do they tend to be younger or older? What are their other interests? would they support a Kickstarter for a new book? What rewards would make them Patreon backers?

In fact, we’ve posted a helpful DIY tutorial so you can ask all of the questions you need to ask — without paying for a potentially-expensive service like SurveyMonkey.

But what if you’re not getting a very healthy response from your readers? Should you seek out additional respondents? Advertise for more input? Solicit other cartoonists?

Be very careful, your quest for more information could result in your getting very, very bad information. And that’s downright dangerous. Here’s why…

We launched another critique series that focuses on Patreon campaigns. It’s becoming more and more important to get this right.

Facebook is announcing a new initiative — The Street — which will offer news on a subscription-only basis. Via Reuters:

The feature is likely to allow publishers to create a paywall on Facebook’s Instant Articles and guide readers to a publisher’s home page to opt for a digital subscription, according to TheStreet report.

This follows a trend that I’ve been talking about here on Webcomics.com for years. As ad-blockers continue to constrict passive revenue, Web publishers will have to turn to more active-revenue means. That means more subscriptions and more crowdfunding.

So, the question is… have you prepared for this — and if not, what do you need to do to be prepared?

I have some thoughts. 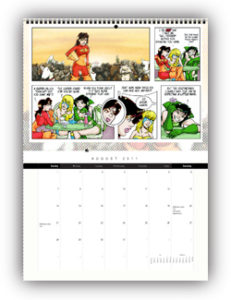 So, let’s take a closer look at some of those specialty products, and how we can start working now to be ready to compete when the snow falls.

Anatomy of a convention banner stand

Mailbag: How long should it take me to do a comic?

Q.: The time it takes me to draw, ink, and color a single comic is usually between 3-6 hours, am I going too slow? I’d like to be able to do more comics per week, but I work full time and I want my comics to stand out from the stick figure, copy and paste comics I come across.

A. You’re asking the wrong question.

Offering an original illustration inside a book — as part of an Artist Edition — is a tremendous way to drive sales and/or Kickstarter pledges.

But… have you ever tried to do a decent drawing on the inside cover (or an inside page) of a book? It’s not easy. And — depending on the coating you used on your cover/pages — the ink doesn’t always take to the surface very well.

There’s got to be a better way…

Five Changes You Should Make Now

I’ve been saying it for the better part of the year — if you’re still doing things the way you did three years ago, you’re making a big mistake. Here are five “traditional” approaches to webcomics that you need to re-think… today.

The National Cartoonist Society has made it easier for young people to join their organization. The Young Professional Program — nicknamed “The 27 Club” offers full membership  for $27 to anyone under 27 years old.

Here’s what you need to know…

What I have found is that I have been able to use my beefed-up blog as part of a greater social-media strategy as well. And it’s all thanks to a very simple HTML tag.

by Brad Guigar on August 14, 2017
Posted In: Archive Dive
Comments available to logged in users only.