Comic Easel has added a handy shortcode to help you place your comic into a page or blog post — and it will be already linked to that comic’s page in your archive.

Shortcodes are WordPress shortcuts. There’s really no magic to using them. You place the shortcode directly into the text of your blog, and — voila — the code does the rest. Don’t be alarmed, however — this isn’t a right-before-your-eyes thing. It will still look like code in the text. But when you hit Publish, it will appear.

The shortcode is [randcomic] That, alone will place a random comic from your archive into the text of the blog or page — already linked to the comic’s page in your archive. Better still, there are modifiers you can apply inside the shortcode:

This shortcode would output any comic the Diablo character is tagged in.

This shortcode would output any comic in the chapter the-big-nothing.

This shortcode would output any comic as a full-sized image. If I had chosen “thumbnail,” it would have, of course, displayed a thumbnail.

This shortcode would output any comic the Diablo character is tagged in — and only in the chapter the-big-nothing.

This shortcode would output any comic the Diablo character is tagged in — and only in the chapter the-big-nothing. And the image would be large.

To me, the real power of this shortcode is the ability to place a specific comic from your archive. For example, let’s say I wanted to place the this comic from my archive:

The slug of the post is “jungle-adventure”. So this shortcode will place the appropriate comic into the post:

The next step is to simply add it into my post. I can do this in Visual mode.

Simple as that. When I publish the post, it will pull the correct image and follow any modifiers I’ve applied. Let’s do a quick example, I’ll use that shortcode and I’ll use one with a modifier… 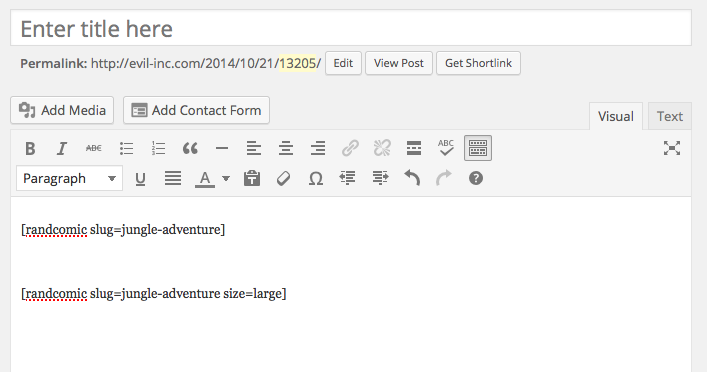 I can check the results before publishing by hitting Preview… 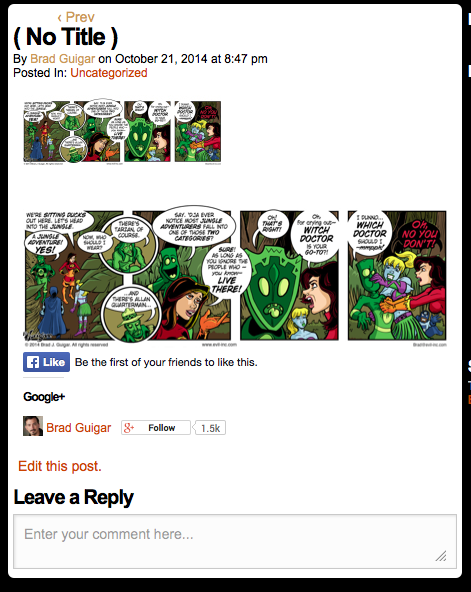 …and there’s my two images — the second of which follows the “large” modifier.

You can even fine-tune this with a little CSS. There’s a class you can assign —  .rand-comic-wrap {} — which is used to float it left, right center it, etc. The style has no defaults, so feel free to add to the style as needed.

by Brad Guigar on October 21, 2016
Posted In: Archive Dive
└ Tags: Comic Easel
Comments available to logged in users only.