10 Reasons Switching to Manga Studio Will Improve Your Comic 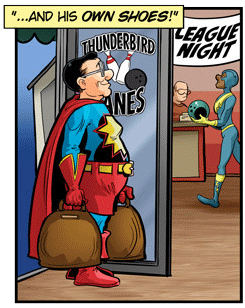 After 25 years of using Photoshop, this was a huge decision. I’d tried several times to make timid forays into Manga Studio, but each time, I got frustrated.

“It’s nothing like Photoshop!” I would exclaim, rage-quitting the software to run back to Photoshop.

Finally, after Lar deSouza offered to spend a few hours via Skype with Dave Kellett and me, walking us through the software. He (and others) generously offered to help troubleshoot issues that might arise while we were making the switch.

Finally, one weekend, I decided that the only way I was ever going to pull this off was to jump in with both feet and commit to creating an entire week of strips in Manga Studio.

It took me an entire weekend — with frustration, more rage-quitting, and a lot of expletives — just to build my standard comic-strip template. But once I got the hang of using some of the basic tools, I started drawing my first strip.

And I’m never going back.

I hated Manga Studio: “It’s nothing like Photoshop!” Now, I’ll never go back. Why? …Same reason. http://wp.me/p4lKly-331 via @Webcomicscom

Here are ten reasons I think Manga Studio EX will improve your comics: