If you’ve ever been curious about the kind of information, tutorials and advice that you’ll get as part of your subscription to Webcomics.com, this is a good example.

There are a few points of booth etiquette that you should be aware of as you’re exhibiting at a convention.

No poaching: You may never — ever — address an attendee while he or she is speaking to another exhibitor. Interrupting a discussion between an attendee and an exhibitor is unforgivable. And if you DO decide to open your mouth, for the love of god, make sure you know the shot! (NSFW language in the movie clip.) 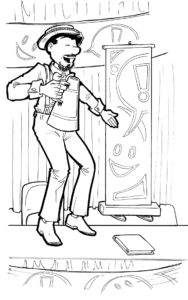 No blocking: It’s important to get as much vertical display space as possible. Placing a tall banner stand behind your chair is perfectly fair. And so is erecting a display that stands above your table. But when you start blocking your neighbors’ ability to see down the walkway you’re treading on dangerous turf. If you have this kind of set-up, you should ask your neighbor’s permission — and be prepared to improvise if they say they’d rather not be blocked by your display.

Stay behind the table: You might think that standing in front of your table, handing out flyers and barking for your table is a great idea, but I guarantee your neighbors don’t. You’re disrupting the traffic flow, and you’re probably causing more than a few attendees to re-think how badly they want to walk down your aisle. Stay behind the table, where you belong.

Be friendly, but know when to shut up: A little friendly chatter is always welcome, but here’s a short list of what your neighbor doesn’t necessarily want to hear:

And watch for those little nonverbal cues that indicate that your neighbor isn’t interested. I once had a booth neighbor talk to me for an hour straight. I hadn’t made eye-contact with him once. If your neighbor is working on a commission, they’re probably “in the zone” (or trying to get there) and they’re not interested in talking to you.

Loud and/or repetitive noises are murder on your neighbors: I’ve seen it all, at this point — bullhorns, those spinning prize wheels that go “clack-clack-clack-clack,” blaring music on a loop. I wrote an entire post about exhibiting next to a Zombie Run event that used an obnoxious high-striker as their promotion. Listen, I know that the marketing book that you bought advised you that noises like this are supposed to draw people to your booth or table. But you’ve got to have a little sensitivity to that poor schmuck sitting next to you who has to listen to it all weekend long.

Neighborhood Watch: Many people do these shows on their own. Or there are times at which their help isn’t around. When a neighbor asks you to watch their table while they take a brief break — to go to the bathroom or grab a snack — you should honor that request. Ask whether there are particularly valuable items (original art, for example) you should know about — and consider advising them to hide it under the table until they return. If you don’t think you can accept the responsibility, say so and explain why. 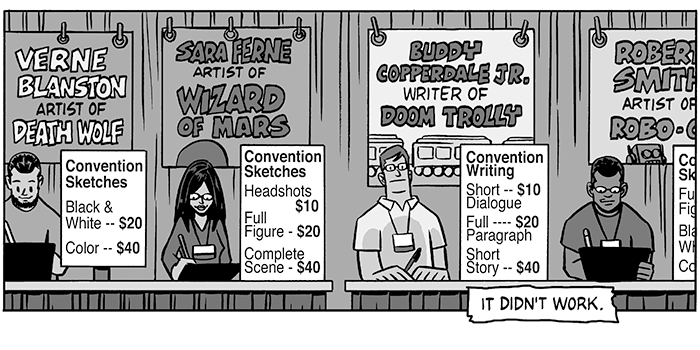 Don’t bump the table: One of the most lucrative parts of a convention, for many artists, is doing on-site commissions. But executing good art under convention conditions is daunting. If you must exit the area, take special care not to bump, jostle or shove the table. This is especially true in Artist’s Alley, where all of the tables are connected. You could be ruining a very expensive piece.

Don’t sprawl: Conventions demark floor space pretty clearly. It’s not hard to figure out what space you’re supposed to inhabit — and what space is your neighbor’s. Don’t let your crap drift over into your neighbor’s space. This is especially annoying in Artist’s Alley. many shows now demark a little walkway behind the tables so exhibitors can easily get in and out. Don’t put your stuff into the walkway.

Got friends behind your table? Tell ’em the rules. This should go without saying. If they’re gonna be back there. tell ’em how to act.

by Brad Guigar on May 20, 2016
Posted In: Conventions
Comments available to logged in users only.