After a discussion of the legal implications of comic convention fan art last year, I posted a piece in February that asked whether we were reaching a tipping point in unlicenced merchandise at cons.

We may be edging closer still.

It started at the Puerto Rico Comic Con last weekend, when Invincibles artist Ryan Ottley spied some veeeerrryy familiar art at the table of an artist working under the name of “GingerZap.” 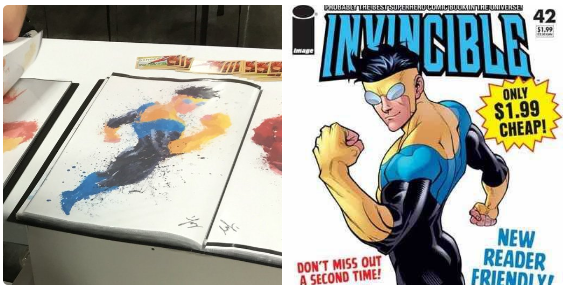 As is the custom, he took his concerns to Twitter.

If your art consists of throwing a crap filter over other people’s art and selling them at cons….just stop. pic.twitter.com/8HHTKA0Rnf

The hits keep coming. Where is @bleedingcool when you need them? pic.twitter.com/tJ1Jj5npVa

Today, with their Philadelphia show only days away, Wizard World e-mailed Artist’s Alley vendors with a review of the rules — notably:

Here’s what that means to you, as an exhibiting artist…

by Brad Guigar on May 26, 2016
Posted In: Business, Conventions
Comments available to logged in users only.