It has long been my opinion that we have entered “post-advertising webcomics” — webcomics that are published without the central support of advertising revenue. Today’s webcomics are much more likely to be anchored by crowdfunding — namely Kickstarter and Patreon.

So I was excited to see this Patreon page pop up… 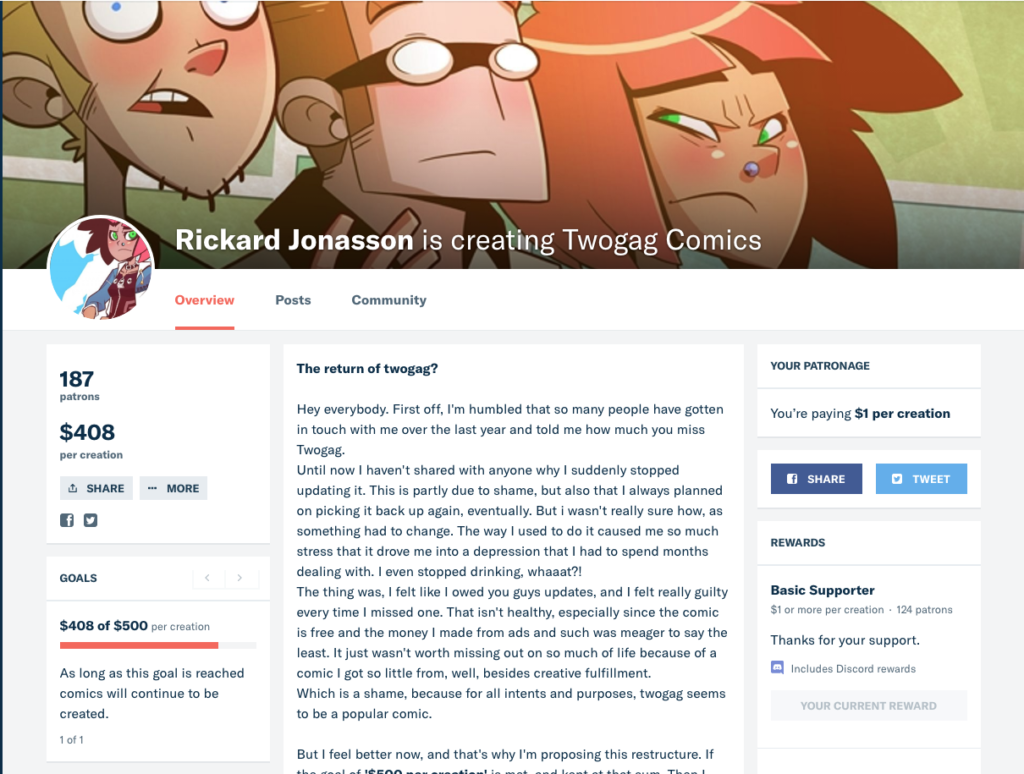 In short, Rickard Jonasson was the creator of the webcomic, Two Guys and a Guy. It was a popular webcomic that posted three-days a week… and then sporadically… and then went on hiatus last December. In the words of Jonasson:

Until now I haven’t shared with anyone why I suddenly stopped updating it. This is partly due to shame, but also that I always planned on picking it back up again, eventually. But i wasn’t really sure how, as something had to change. The way I used to do it caused me so much stress that it drove me into a depression that I had to spend months dealing with. I even stopped drinking, whaaat?!

The thing was, I felt like I owed you guys updates, and I felt really guilty every time I missed one. That isn’t healthy, especially since the comic is free and the money I made from ads and such was meager to say the least. It just wasn’t worth missing out on so much of life because of a comic I got so little from, well, besides creative fulfillment.

Which is a shame, because for all intents and purposes, twogag seems to be a popular comic.

So, he’s bringing the comic back. But the fascinating thing is how he’s choosing to do this. And I think it’s the official start of the second phase of Post-Advertising Webcomics.

by Brad Guigar on October 11, 2017
Posted In: Crowdfunding
Comments available to logged in users only.