August was an excellent example of the tremendous value offered by a subscription to Webcomics.com. My readers got early alerts on issues that would impact their businesses, helpful tutorials, insightful analysis, and meaningful feedback on their work. Here are some samples of what you may have missed…

I saw significant uptick in Patreon backers whose payment came back with the Fraud tag this month.

Luckily, we’re all pretty creative people, so if we can get ahead of the curve, perhaps we can nip this in the bud. So let’s start brainstorming some proactive measures. I’ll offer a few to start things off…

Editor’s Note: Using the strategies presented in this post, I saw a decrease in fraudulent charges of nearly 100%. [Subscribers can read the entire post]

This is the first of a series of Hot Seat critiques in which we’ll be discussing members’ Patreon outreach. First up… [Subscribers can read the entire post]

Ripl — No significant improvement in engagement I have to admit, I was captivated by their Facebook ad. Ripl offered an easy way to create animated posts for social media. The examples were swank, and the promise of increased social-engagement was too good to pass up.

I was disappointed by the results. [Subscribers can read the entire post]

Tapastic’s “incubator program” has a lot of webcomics newcomers starry-eyed.

Let’s drill down on some details. [Subscribers can read the entire post]

Anatomy of an Effective Crowdfunding Video

The crowdfunding video is a deceptively difficult nut to crack for many of us. It’s a crucial aspect of a successful crowdfunding campaign. But we cartoonists don’t tend to exactly excel in the skills required to do this well. Recently, my friend, Dave Kellett launched a Kickstarter campaign that featured a video that was done so well, I wanted to use it as a case study in Doing Things Right. [Subscribers can read the entire post]

If you create exclusive content for Patreon backers, you may be interested in Patreon Marker — a Web app that puts an invisible watermark on the files your backers download. If you find that your exclusive work has been uploaded elsewhere, you can use the Patreon Marker app to read the file and discover who pirated your work. [Subscribers can read the entire post]

Stop Promoting to Other Cartoonists!

Let’s discuss why it’s so bad — and more importantly, let’s identify some much more effective methods of promotion! [Free Friday! Read the entire post without a subscription!] Wanna do better at social media? It can be boiled down to two sentences.

In an earlier piece for Webcomics.com, I emphasized the importance of personal branding on social media. I said:

Is [my personal brand] accurate? Yes and no. All of the [descriptions] above are truthful, but my presentation of them is decidedly one-sided.

It’s because I know why I’m on social media.

And it ain’t to tell you about my failures. 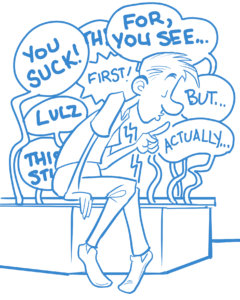 In February 2015, I published a post that asked if webcomic creators really needed to host a comments section on their sites. By May of that year, I reported that I had curtailed commenting — and it had numerous positive side-effects for me. This release from NPR.org made it even more clear

[Free Friday! Read the entire post without a subscription!]

Sadly, it’s not uncommon for me to see a GoFundMe campaign to help a family in need raise the money for an astronomical medical bill. But recently, I saw a GoFundMe campaign that sought the funds to launch a print comic book. My initial reaction was shock. This was a commercial enterprise in a place typically reserved for charitable donations! But beyond that, it made me sad to think that someone could have such a vast misunderstanding of simple business basics.

Six Common Mistakes Made by Webcartoonists [Free Friday! Read it without a subscription!]