Humor Writing — One Step At A TIme 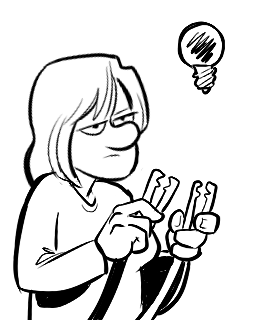 We had gotten through the midterm-project critiques more quickly than I’d anticipated, and I had class time remaining. And I hate wasting those few hours we get together every week. So, I decided to spend a little time doing some writing exercises that I had planned for an earlier class (but never got to).

The first exercise was relatively straightforward. They each received one character type (clown, spy, child, hero, cowboy, maid, etc.) and one setting (moon, airport, DMV, coffeeshop). Their assignment was to write something funny that combined those two elements.

So we moved on to a second exercise. The were told to map out four panels. Then, they were told to start the first panel with a character and a sentence — nothing more.

Once they’d finished, I had everybody pass their paper to the person on their left. Now the instructions were to simply build on the first panel. Find the drama. Build the tension. Expand on the idea.

Once that second panel was completed, the pages got passed to the left again. Each student was now presented with a fresh two-panel set-up. The goal was simple: Keep building the tension and try to leave a clear path to a fourth-panel punchline. If they did their jobs well, the next person should be able to bring that fourth panel home with an easy slam dunk.

The results were funny. Very funny. Way funnier than the results of the first exercise. The resulting critique was punctuated by giggles, laughter — and suggestions for improvements, follow-ups and stinger gags*.

What was the difference between the first exercise and the second one?

In the first assignment, the students were thrown two random elements and were put in the awkward position of finding something that connected the two. Hopefully that connection could be exploited in a humorous way.

It’s not a bad way to get the creative juices flowing — and it’s a decent writing prompt for single-panel comics. But it relies on some humor-writing chops that some of my students were still developing.

The second project, however, was different. Instead of trying to make lightning strike, the students focused on the basic craft of a comic strip:

And, when they were simply focused on doing each step to the best of their abilities — instead of trying to be funny in the first step — the very process…

… often brought them to a place from which they could easily identify a punchline.

Moreover, this approach could be coupled with a brainstorming technique (like Cascading Brainstorming) into your writing routine to help find the Funny more consistently. In other words, instead of doggedly following a single set-up to a single build-tension to a single punchline, a writer might experiment with several set-ups. And then, one could follow those set-ups to alternate build-tension moments (and several subsequent punchlines). Better yet, the development can happen in all directions. A good set-up might suggest an improvement on the introduction. And the way those two panels work together might suggest a path to a punchline that is a huge improvement over the initial glimmer of a joke.

And why? Because it’s hard to be funny. Sometimes it’s beneficial to break the process down to its elements and simply concentrate on doing each step to the best of your ability. My students found that focusing on the structure of setting up a joke took them to a place from which they could write better punchlines.

If you struggle with writing humor — or if you’re feeling brainlocked and need something to kickstart your creativity — maybe this is an approach that could be beneficial to you as well. If you do experiment with it, please report back and share your experiences!

* Little punchlines that follow the main punchline that serve to deepen the humor.

by Brad Guigar on February 26, 2016
Posted In: Writing
Comments available to logged in users only.