Last month was an excellent example of the tremendous value offered by a subscription to Webcomics.com. My readers got early alerts on issues that would impact their businesses, helpful tutorials, insightful analysis, and meaningful feedback on their work. Here are some samples of what you may have missed…

There’s a lot of misinformation on this one floating around, so be careful! International shipping can be expensive. As a result, many creators opt for the relatively cheap First Class Mail when shipping original art to buyers and crowdfunding backers. However, this month a new USPS rule went into effect that disallowed using First Class International to ship merchandise such as original art. The Post Office now requires merchandise to be shipped via Priority Mail International. In other words, shipping art internationally just got a lot more expensive. 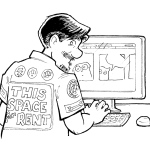 Even if you’ve started to transition away from an ad-supported business model, the Q1 slump is a phenomenon that’s worth your attention.

As I mentioned before, ad revenue tends to plummet in the first part of the year. Most businesses are reassessing their budgets in the first quarter, and most of them habitually cut back on spending until those budgets are cleared. It’s especially noticeable coming after November and December, when ad budgets are ablaze with holiday-shopping promotion. It’s a steep drop that puts me into an annual panic.

But the Q1 slump goes deeper than ad revenue. Your traffic is probably slumping right now, too. The holiday season — and all the stress that comes with it — is over, and your readers are in recovery mode. The harsh winter weather hasn’t helped much. And, let’s face it, if you’re like a lot of us, you’ve probably had a hard time getting your own creative engine started in the last few weeks.

Back up your site

In 2013, I published some advice on backing up your website. It seems that one of the most heavily-recommended options — a third-party plugin called WordPress Backup to Dropbox — has been abandoned by its developer. Realizing that my sites were in need of back-up, I decided to revisit the topic and update my recommendations. [subscribers can read this post]

To be honest, it was a tip that I passed along, but personally dismissed. Patreon had been insisting that they had a simple way I could improve my ability to earn backers, but it was so simple, I decided it couldn’t be that important. I was wrong.

Here’s what I found out… [subscribers can read this post]

Your mash-up t-shirt is not parody

It happens regularly. An artist is outraged because someone stole their design! And when I click over, I see the design in question is a mash-up between two licensed properties that this person couldn’t possibly have the rights to. In other words, they’re complaining that someone stole the design… that they stole.

And I always see the same justifications:

I’m not making any money (or very little) off this!

So let’s take a moment to understand Intellectual Property a little better.

Calls for entires have gone out for both the Eisners and the NCS Division awards. Webcomics.com collects the submissions guidelines for each to make entering these competitions as smooth as possible.

Our most-recent Webcomics.com Poll asked “What improvement to your site would you consider most important?” The responses were enlightening… [subscribers can read this post] 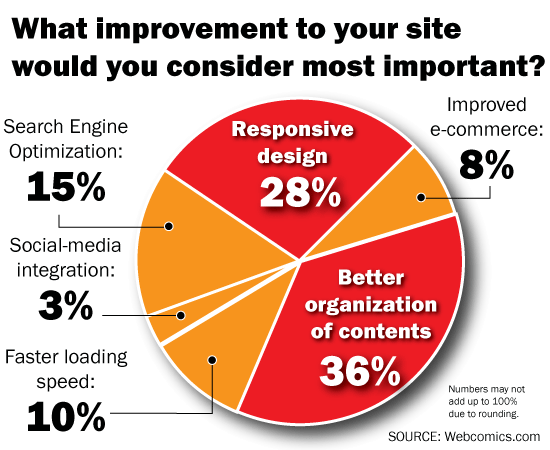 We launched a new series of Hot Seat critiques! It’s a Hitch It / Ditch It. I’ll review your webcomic site and list one thing that needs improvement as well as one thing you’re doing very well! Then I’ll open up the conversation to the membership of the site.

I’ve also written that I think many of us are going to have to turn to a subscription-based model (such as either Patreon or a traditional subscription-based Web site). Some of you got confused, thinking I was proposing this as the better method of serving readers. If this is you, I want you to read that post again carefully. It’s not the better choice — especially from the standpoint of readers. However, once ad revenue is removed, it just might be the only choice you have, if your goal is to earn an income through your self-published comics.

If you need any real-word examples of how this is playing out against the broader landscape, simply look to the new Star Trek series. It wasn’t available on Netflix or Hulu. Rather, it was exclusive to CBS All Access — the network’s own subscription-based delivery service. Throw in other existing services such as HBO Go, and it’s clear to see that a fantasy/sci-fi fan is going to have to keep several subscriptions going to continue watching shows like Daredevil, Star Trek, Game of Thrones, and so on.

Having discussed Instagram’s new algorithm, it occurred to me that I hadn’t discussed the new Facebook operating system. In case you missed it, a bunch of people are convinced, once again, that Facebook is going to kill their ability to reach their readers. And, once again, understanding this requires a deeper discussion on the topic. So let’s do that… [subscribers can read this post]

Part of the new dashboard that Patreon has rolled out is the Exit Interview. When a patron discontinues his or her pledge, they are offered an exit interview. This gives them a chance to explain why they’re leaving.

I’ve found this to be the classic good news / bad news situation.  Here’s why… [Read this post for FREE]

I’ve been seeing a lot of discussion about the new Instagram algorithm. Although it’s virtually impossible to get verified information, I wanted to pass along some advice I gathered to help navigate these waters. [subscribers can read this post]