So, let’s take a closer look at some of those specialty products, and how we can start working now to be ready to compete when the snow falls.

I’ve been pretty dour on calendars as merchandise in the past, and, truth be told, I’m still not a huge proponent of the practice. As I’ve stated before, calendars have a very limited shelf life. Few people buy them after January. That means you either have to have a very strong, dedicated readership to pitch to or you have to go Print-on-Demand (POD) which brings the unit profit way down.

I am a fan of the calendar-creation tool at Lulu.com, and Redbubble.com seems to have a pretty snazzy set-up for calendars, as well. So, as long as I don’t invest too much time on it, I can usually justify putting out a POD calendar. 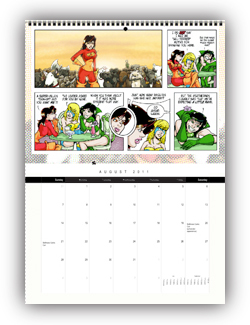 Lulu gives you a choice between two sizes: a large-format calendar that measures 13.5 x 19 inches and a standard-sized one at 11 x 17 inches. The Redbubble calendars are 11.7 x 16.5 inches.

For a step-by-step walkthrough of Lulu’s calendar-creation tool, read this archive post.

The large-format calendar (like the sample on the right) has a spiral-bound spine at the top, holding sheets of 13.5 x 19 -inch stock.

Dates: Are you confirmed on any convention appearances for next year? Semi-confirmed? Put it on the calendar! (Just make sure to be clear if any of these are tentative dates.) Other dates to note:

Pricing: Lulu allows you to set your own royalty, but try to keep the final price as close to $20 as possible (for the standard size). $30-range for the larger version.

Of course, you could buy a larger number of calendars for yourself, driving the unit cost down, and then try to sell them for a larger profit on your own site. You can do this through your POD vendor or you could invest in an offset print run. However, you risk buying too many and then being stuck with them in January when sales dwindle.

Of course, you can always use them as a loss leader to drive sales to your store later in the month.

When I released my 2010 calendar, it was November. And, truthfully, I figured this was plenty of time. One of my readers was very upset with me for releasing it so late.

I was perplexed. I couldn’t imagine anyone wanting to purchase a calendar before November, and yet, there was clearly a segment of my readership who had already completed their calendar-shopping for the year — and given the choice, they would have chosen my offering if it had been available.

So, this year, I offered my calendar in early-October. And my sales have been brisk.

But my new recommendation is to release your calendars at the beginning of September! I’ll get into why in a moment.

I realize that this advice is coming to you too late for this year, but you can put it in the back for your head for next year. (I’ll try to have a Friday Archive Dive on this post next year to remind you!)

But there’s an even better reason for having your calendar out early: Conventions!

How did I overlook that?!

I brought 20 calendars to New York Comic con this year, and I was sold out either Saturday night or early Sunday. They flew off the table.

Calendars have an edge on the convention table:

If I had those calendars on my table in Baltimore the month before, I’m convinced that I would have made a killing.

About midway through the convention in New York, one guy who was buying a calendar asked for a sketch inside it — the way I do with books.

How did I overlook that?!?

Thinking on my feet, I asked him what month his birthday fell in. He said “April,” and I flipped the calendar open to that month and did a special sketch, with one of my characters delivering birthday wishes.

Every calendar after that had a special sketch on purchaser’s requested month.

Even if you’re not planning to attend conventions in September, October or November, you should still plan to have your calendars prepped and available by September because if you do, you can order yourself a small stack and offer them on your Web site as Artist Editions.

Most storefront solutions include a way for the purchaser to communicate with the merchant. In PayPal, it’s “NOTE TO MERCHANT.” Advise your readers to indicate the month they want the illustration drawn in — and any birthday messages (if this is a gift for someone else, for instance) — and you’ve got a rock-solid early-Fall merchandise offering.

And your sketches could be simply your characters, or they could deliver birthday wishes, or they could contain references to the person’s astrological sign… the possibilities are endless.

Heck, you could do a very limited number of calendars with sketches on each day and sell it for a premium price.

A few years back, I launched a couple of Christmas cards and the response was so overwhelming, I vowed to start earlier the following year so I could take advantage of this opportunity better.

Designing Christmas cards — and let’s note here that the term “Christmas card” is being used as a catch-all phrase for all of the holiday cards that get purchased during the winter holidays — is a lot like designing T-shirts.

What they are going to buy are cards that express your unique sense of humor or your identifiable illustration style. It’s perfectly fair game to swipe a punchline from a strip. And it’s perfectly OK if the card has little-or-nothing to do with your comic.

Take the this good advice about designing great T-shirts and apply it to your Christmas card concept.

Like I said, I produced two that year. Both are posted a little further down. The first one is related directly to the theme of my comic, but had content that had not appeared in the strip (yet). The second one was completely unrelated to the comic. Both sold well, although the one that matched more closely the “Evil Inc” theme sold a little bit better.

When you think about it, designing a greeting card is very similar to creating a two-panel comic. The cover is the first panel and the inside can be the second panel.

In fact, it’s an incredibly effective two-panel comic because it’s impossible to look ahead to the punchline and ruin the build-up. You can build a nice amount of suspense that will charge the pay-off nicely. For example… 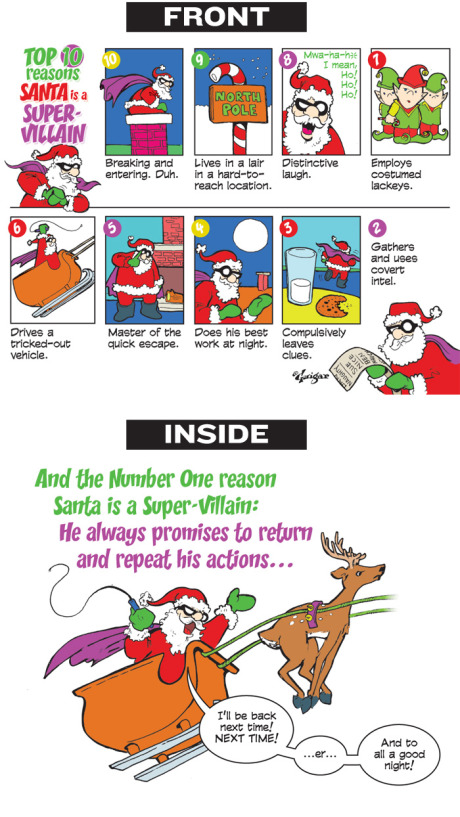 Of course, you can also approach it as a single-panel comic — with a nice, themed message on the inside. 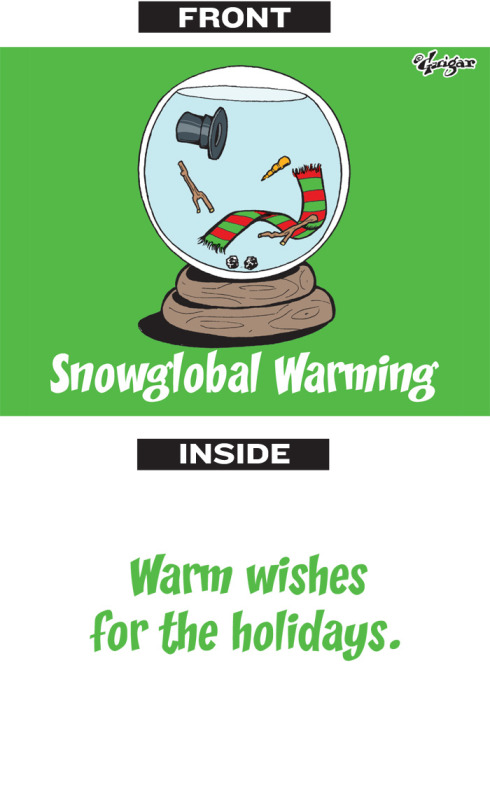 The usual online printers are already offering specials for people printing greeting cards for the holidays. PSPrint has offered as much as 60%-off. Overnight Prints has offered 50%-off on holiday-related printing.

Make sure appropriately-sized envelopes come with the order. If not, buy some, and factor that expense in to your final price.

Remember, you’re shipping off someone’s greeting cards. They need to arrive in good shape. I bought these cardboard boxes from Uline last year, and they performed beautifully.

by Brad Guigar on July 20, 2018
Posted In: Uncategorized
Comments available to logged in users only.